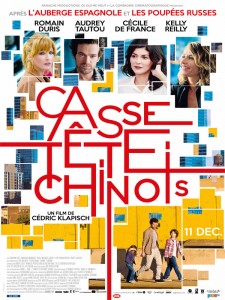 Xavier is now forty years old.
We find him with Wendy, Isabelle and Martine fifteen years after L’Auberge Espagnole and ten years after Russian Dolls,
Xavier’s life has not necessarily settled down and everything even seems more and more complicated. Although now a father of two children, he still has the travel bug and this time it leads him to the heart of Chinatown in New York. In joyful mayhem, he tries to find his place as a father and as a son… and as a man!
Separation. building a new family. Homosexual parents. Immigration. Illegal workers. Globalization. Xavier’s life is a genuine Chinese puzzle. A life like New York and current period, which, although they my not be calm or coherent, at least Xavier him plenty to write about.