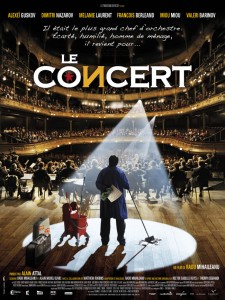 At the time of Brejnev, Andrei Filipov was the most famous big boss of orchestra in the Soviet Union and managed the famous Orchestra of Bolchoï. But after he refused to fire his Jewish musicians, including his best friend Sacha, he was dismissed in full glory. Thirty years later, he stills works at the Bolchoï but as a cleaner. One night, while Andrei stayed very late to polish the desk of the boss, he finds a fax sent to the manager: it speaks about an invitation of the Théâtre du Châtelet inviting the Bolchoï orchestra to come to play in Paris … Suddenly, Andrei has a crazy idea: why not to gather his old band with his friends who live on casual jobs today, and to take them in Paris, pretending they are the Bolchoï orchestra? What a good opportunity to take a revenge…